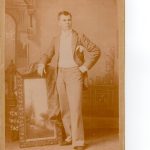 The study of the career and accomplishments of a successful man is full of educational value, especially when such an individual has achieved tangible and practical results. A record of the accomplishments of some men in the brief span of their life’s period reads like romance. Without knowledge of attending conditions, it seems almost impossible that one man might climb so high or find time to superintend the details of such great interests, yet there are men of today whose capability and whose genuineness endow their work with permanence. Such a man is Robert Edward Lee McCaskill, president of the R. E. L. Mc Caskill Company, of DeFuniak Springs, and one of the leading real estate, land, and timber business operators of West Florida.

Mr. McCaskill belongs to one of the old and honored families of Walton County, where he was born at Eucheeanna, June 4, 1871, a son of the late John Jett and Sarah Elizabeth (Flournoy) McCaskill, and a grandson of Kenneth and Sarah (Knight) McCaskill and of John and Mary (Knowles) Flournoy, the grandparents on both sides being natives of North Carolina who were pioneers of Walton County. John Jett McCaskill was born in Florida, where he spent his entire life and was connected with numerous extensive enterprises. While a large measure of material success attended his efforts he was best known and is most generally remembered for his true, spiritual character. Broad-minded, sympathetic and generous, he was not content to forge ahead himself, but sought to bear others along with him and shared the burdens of life with those less fortunate. The love his associates bore him was blended with the respect his capabilities commanded and his influence was felt by all who had the honor of knowing him. DeFuniak Springs, the scene of his operations, felt his loss, as any community does when one of its real men is taken away. His operations in timber alone covered the territory lying between Tallahassee and Pensacola; he was a leading merchant and operator of naval stores and an agriculturist whose broad acres produced abundant crops. A pioneer in all worthwhile movements, he was, at the time of his death, president of the First National Bank of DeFuniak Springs, and one of the organizers and a stockholder and vice president of the West Florida Naval Store, at Pensacola, in addition to which he was prominently identified with various other great interests. To the poor, his death was nothing short of a tragedy, for he was ever their friend. He received from life much; he deserved much, but, he also gave much. A man of energy, acumen, force of character, liberality of views, and, above all, sterling integrity, he had all those qualities which inspire confidence.

Robert Edward Lee McCaskill attended the public schools of Walton County and spent one year at the West Florida Seminary at Tallahassee, completing his education at the age of fifteen years and at that time starting work with his father, in the mercantile and lumber business at Freeport, the elder man being the owner of a large sawmill and lumber yard on Choctawhatchee Bay. He remained with his father from 1888 until 1912, in which year he located at DeFuniak Springs and embarked in the real estate, land, and timber business. It is probable that Mr. McCaskill has done more than any other one man to encourage the development and colonization of West Florida, having advertised extensively all through the North and Middle West, including such leading cities as Chicago, Cleveland, Detroit, St. Louis, Kansas City, etc. His land holdings are of the most extensive character. Mr. McCaskill is one of the trustees of Palmer College of DeFuniak Springs and a member of the Presbyterian Church.

On September 15, 1895, Mr. McCaskill married at DeFuniak Springs, Miss Florence A. Griffin, daughter of Judson and Angeline (Judson) Griffin, of New York state, both now deceased. Four children have been born to Mr. and Mrs. McCaskill: Harold Judson, Margaret Elizabeth, Angeline Lucile and Evelyn Juanita. Mr. and Mrs. McCaskill are greatly popular at DeFuniak Springs, where they are active in all worthy movements. Fraternally Mr. McCaskill is a Knight Templar Mason and Noble of the Mystic Shrine, an Elk and a member of the Woodmen of the World.

This site uses Akismet to reduce spam. Learn how your comment data is processed.